In response to Austin Interfaith's call to support unaccompanied minors from Central America, Austin City Council passed a resolution officially welcoming the children and calling on the City Manager to collaborate with other governmental entities to identify ways to support children relocating to Austin.  City council also passed a resolution calling on City staff to explore ways of making a municipal ID available, which could provide a valid form of ID for adults currently lacking access to officially recognized identification.  Both resolutions passed unanimously! 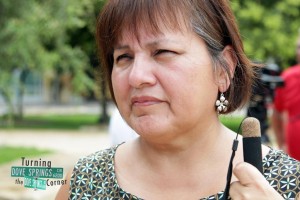 Austin Interfaith reported to the Austin American Statesman that the organization teamed up with judges to build a hybrid model that would improve indigent defense.  She lobbied County Commissioners to support the establishment of a defender’s office that would assign lawyers to the cases of poor defendants.

The first year, Travis County would receive about $700 thousand to establish the new office, which would ensure that indigent defendants would have an opportunity to meet with their lawyers so that they understand their situation before going to trial. 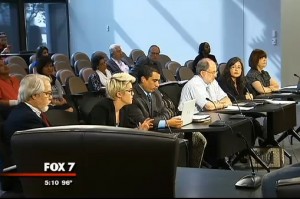 Austin Interfaith is calling for an organized, coordinated effort to receive a large number of unaccompanied minors.  This, they say, shouldn’t be political.  For AI strategy team leader Ofelia Zapata, the future of migrant children hits close to home.  She sees the face of her own grandchild when she looks at them.

In a presentation to the Travis County Commissioners Austin Interfaith described the arrival of unaccompanied children a humanitarian crisis that requires a thoughtful and proactive response.  Specifically leaders are calling on the County to coordinate the use of public buildings to temporarily house children before they are sent to relatives or a foster family and wait for their day in immigration court.

AI Leaders Offer Ideas for Use of Medical Center

At a Central Health public hearing over how to use UMC Brackenridge when it closes and a replacement teaching hospital opens in 2017, Austin Interfaith leader suggested putting an array of social services on the campus.  Services like daytime mental health care of seniors would simultaneously provide caregivers with short-term respite.  “It could be a haven of hope for Austin” residents, Zapata said. 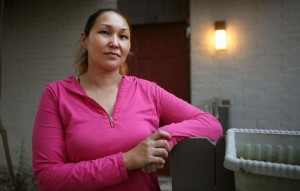 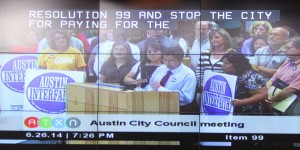 At the urging of Austin Interfaith, Central Texas Bishops, Catholic Charities and immigration reform allies, Austin City Council unanimously passed an official denunciation of Travis County's "Secure Communities," directing the City Manager to explore alternative ways to book arrests.  High achieving 13-year old Alan Gonzalez Otero, from Our Lady of Guadalupe Catholic Church and Austin Interfaith, testified against Secure Communities, describing an occasion when he was 9 years old and thought he might never see his father again.  Rev. Thomas VandeStadt of the Congregational Church of Austin reminded the Council that Central Texas Bishops opposed cooperation between law enforcement and immigration, and that "on principle" was opposed to Secure Communities. City Hall Chambers, filled with 300 supporters of the resolution, erupted in cheers as the Mayor announced the 7-0 vote. 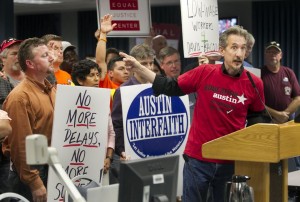 After Austin Interfaith leaders and allies rallied at AISD to urge school board members to vote in support of federal prevailing wages for bond project construction workers, the AISD votes in support of living wages a little before midnight.  Barbara Budde of the Austin Catholic Diocese started off testimony that night with a letter from Bishop Joe Vasquez urging the school board to support the proposal.   Leaders of Austin Interfaith member institutions IBEW, Our Lady of Guadalupe Catholic Church, Education Austin, LiUNA, Workers Defense Project, Painters Local 1779 and the Equal Justice Center delivered impassioned testimony to the same end. 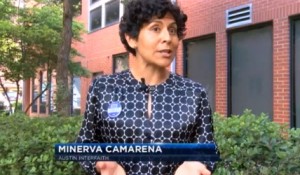 Dozens of Austin Interfaith leaders convened at an AISD school board work session to ask the board to abandon the use of an outdated 2005 wage standard and adopt federal Davis-Bacon wage standards, in line with what the City of Austin, Travis County and Del Valle ISD use when paying construction workers for school projects.  Leaders from Education Austin, LiUna, Workers Defense Project, Travis Heights Elementary, IBEW, Temple Beth Shalom, St. David Episcopal Church and the Equal Justice Center testified about the benefits to workers, families, the school district and the economy at large. In photo, Minerva Camarena-Skeith explains to Telemundo Austin how Davis Bacon wage standards would benefit construction workers.

Rabbi Alan Freeman and Harmon Motch reflect on a 10:1 redistricting civic academy held at Temple Beth Shalom last month in District 10, and what this means in the upcoming election.

In Austin’s District 10, a Focus on Preserving the Good Things, Austin American Statesman

The Austin Independent School District Board approved several construction projects last night. That's despite the fact that the workers hired for those projects will be paid based on 2005 standards.

The issue came up at the school board's meeting last month - when trustees talked about adopting a new pay rate study. But so far, that hasn't happened.

Minerva Camarena-Skeith is a member of the non-partisan group Austin Interfaith. She says the old pay rate scale is hurting local families.

"Last month we were glad to hear from this board that we should not be approving construction projects with a price tag with the 2005 labor standards - and that was about $2 million. Yet here we are again today with the consent agenda asking for eight contracts that are over $3 million under those old wage standards."

Trustees said last month they decided to move forward with projects in order to make sure they were complete by the start of next school year.
Projects on the consent agenda last night included moving and renovating portable classrooms and modifying kitchen plumbing systems across the district.