Council Members begin voting on the 2015-2016 City Budget Tuesday,  September 1st.  You can make a difference until Monday, September 7, before Councilmembers make their final decisions on Tuesday, September 8.

Since 1999 the City of Austin budget has grown by 38%.  95% of that growth has gone to public safety -- predominantly the police department.   Despite the child poverty rate of Travis County being 24%, and despite the city of Austin having at its disposal more funds this year than last year, no significant new city investment is planned to address missing resources to lift children and families out of poverty. The proposed city budget calls for 106 new staff for the police department, yet would cut after school programs, and other services for families.

Austin Interfaith, and our congregations, call for a more just, and humane city budget.

You can impact  our city’s budget by calling and emailing the Council and Mayor before September 8th.  Call and write city council today to urge them to support the Austin Interfaith budget priorities that invest in our city’s children and working families through investment in after school programs, libraries, parks, living wages, and affordable housing. Currently we have 5 votes in support of many of our priorities. WE NEED ONE MORE VOTE! You can contact all the council, not just your district.

You can email all Council Members at once at this link: email all of city council with one message 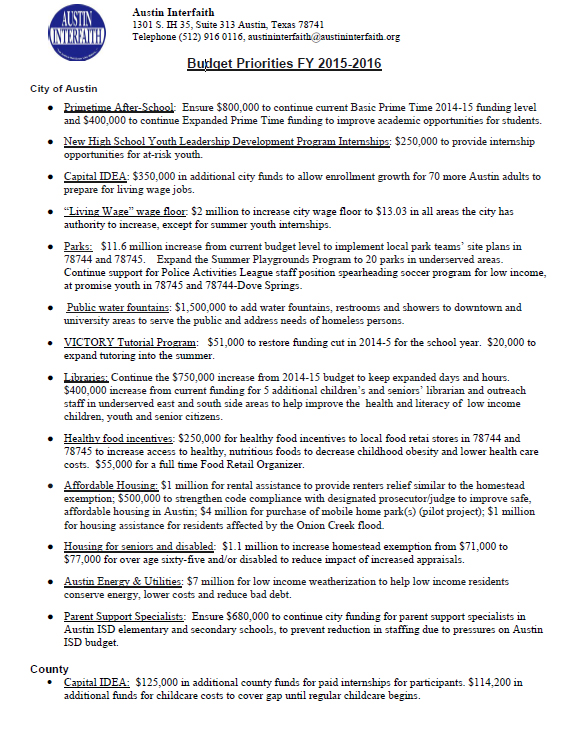