On April 29th, Austin Interfaith held the largest assembly in the city with 500+ organization members at Mount Olive Baptist Church; the church is located in Precinct 124 in East Austin.  Early voter turnout increased by 65% compared to 2011 council election turnout and by 9:30pm Saturday night had recorded an 85% increase over final election day turnout from 2011.   These increases in raw numbers of voters were the result of coordinated efforts by Austin Interfaith member congregations in East Austin.   Efforts included pulpit announcements to vote in several eastside congregations, GOTV walks held by 24 leaders over two weekends and phone banking involving a team of 9 additional leaders from downtown congregations

Austin Interfaith leaders increased voter turnout in Dove Springs' precinct 450 by 131% compared to 2011 council election turnout. This southeast Austin precinct is known as a low voter turnout neighborhood, but over 100 Austin Interfaith leaders participated in several neighborhood Get Out the Vote walks in 2012, including two during early voting season. On Saturday, May 5th over 25 leaders of Austin Interfaith walked door-to-door in Dove Springs and got signatures from 127 voters who supported the Austin Interfaith agenda, and committed to vote. In addition to door-to-door walks, leaders called over 2,000 voters in south Austin. Leaders continued to block-walk on election day, as well as phone bank and drive voters to the polls.
The voter turnout in these precincts are in addition to the citywide Get Out the Vote Campaign focused on our neighborhoods and institutions. Austin Interfaith is a non-partisan organization of member congregations, schools, workers' associations and non-profits building power through the organization of a voting constituency in support of an array of issues around the interests of families and individuals in Austin.
Video Here
Share

Leaders piled into City Hall to ask City council members to raise the minimum workers would be paid.  Says Garcia,”When we’re using public funds we’ve got to bring in jobs where families can at least afford to eat.” 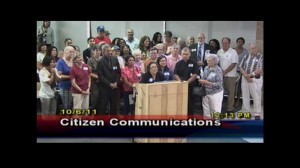